What a week! The Environment Agency set out plans to manage water in the middle River Severn catchment in Worcestershire and the Marine Accident Investigation Branch issued a welcome reminder about the perils of mooring deck safety. And on top of all that, the Prime Minister resigned! But enough on the headlines — here are some things you might have missed this week.

On Thursday, the Office for Budget Responsibility released its annual report on fiscal risks and the long-term sustainability of the public finances. Another OBR report, another confirmation that public debt is “on an unsustainable path in the long term”. The OBR’s baseline estimate is that, with no change in policy, debt will rise to 267% by the 2070s. The pessimistic forecast, factoring in the risks that come from a more unstable world and long-run high energy prices is much, much worse. A useful reminder with all the talk of unfunded tax cuts.

The chief cause of our bleak fiscal outlook remains demographic. An ageing population will put significant pressure on public services which mainly support the elderly — health, social care and pensions — and reduce the tax base needed to pay for them. The graph below does not paint a pretty picture — by the 2070s, there will be more than 50 people over the state pension age for every 100 working age adults. 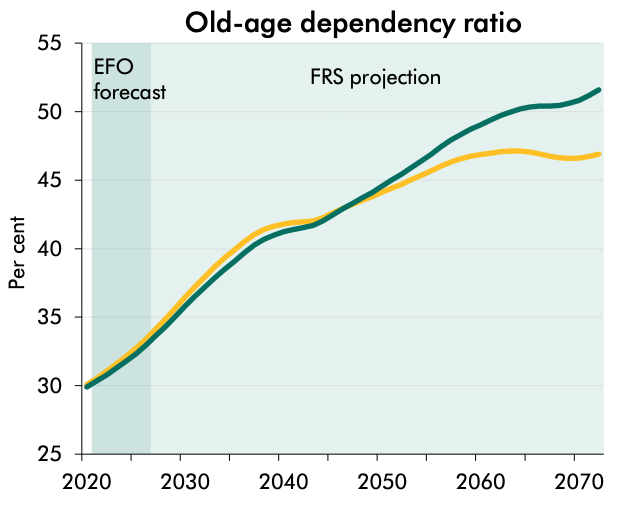 This demographic imbalance is one of the many reasons Reform has always called for an honest debate on how to deliver and pay for public services in the long-term. Let’s hope someone’s listening…

Elsewhere this week, a rare piece of good news out of NHS England (no, it’s not the chemotherapy drones). Chief Executive Officer, Amanda Pritchard, announced that by 2023-4 the organisation will be between 30% and 40% smaller than it currently is. There are obvious practical reasons for slimming the centre: with the recent merger of NHS Digital and Health Education England into NHS England, many duplicate back office roles can be streamlined.

But it also marks some welcome intent to move away from a top-down, command and control-oriented organisation to one that devolves power and responsibility to regional systems that better understand the needs of the people they serve. Regular readers of The Week will know that we aren’t huge fans of Integrated Care Systems but ceding power is an unusual and welcome first step for the world’s biggest quango!

Finally, last Sunday, the Shadow Health Secretary Wes Streeting set out Labour’s plans for the future of social care — it’s still early days but it looks like Labour are keen to reheat their 2017 proposal for a National Care Service. Alarm bells immediately ring at the suggestion of having a service that is “publicly owned, publicly funded and free at the point of use”. Given the demographic challenges outlined above, free adult social care is not a sustainable policy idea.

But imitating the NHS also risks undermining what makes social care unique: its ability to provide person-centred care, built on relationships not hierarchy (as Camilla Cavendish argued in her independent review of social care). A clinical, one-sized-fits-all approach is the exact opposite of what social care needs. Labour should be careful what it wishes for…

With wall-to-wall political analysis, opinion and commentary, we thought this week we’d share some uplifting listens and watches to take your mind off the turmoil…

First up is cricket legend Freddie Flintoff putting ‘levelling up’ into practice in his new series Field of Dreams. Flintoff is attempting to build a cricket team with sceptical lads from his hometown, Preston. We’ve only had the first episode, but viewers can already see the difference that a bit of opportunity, encouragement and self-belief can make to the young men.

Second, Sam Smith’s BBC radio series on the history of HIV in Britain is a must listen. This year marks the 40th anniversary of the AIDS-related death of Terry Higgins and the series both honours his life and documents the remarkable campaign to destigmatise HIV, make treatment available and end transmission of the disease. It’s a huge social and medical success story that we should celebrate much more.

Finally, this Radical Reformers podcast from May with Chris Wright sets out a radical case for innovation in public services. Chris notes that bold thinking is difficult in a system not set up to encourage new ideas, but argues that challenging the “bureaucratic mindset” is vital to building services that work for those that need them most. Hear, hear!