As the Conservative leadership candidates prepared for their Sky News debate yesterday, all eyes were on Threadneedle Street. Although we’d ordinarily avoid covering such a saturated topic in The Week, the starkness of the data, and what it will mean for households across the country come Christmas, deserves the attention of all of us.

The Bank expects inflation to rise to over 13% in the fourth quarter of this year, and remain high throughout 2023. It also predicts a recession this Autumn which will last for longer (although be less deep) than the financial crisis, and announced the biggest interest rate rise in 27 years. The principal driver of this stark economic picture is soaring wholesale energy costs. Ofgem’s price cap is expected to reach £3,500 in October, and may reach as high as £4,000 in early 2023. Martin Lewis, Money Saving Expert, has said that over 10 million peoplecould be pushed into fuel poverty.

Meanwhile, we know that, globally, the poorest households are particularly vulnerable to the effects of the cost-of-living and energy crisis. But without serious intervention, the UK’s poorest are at risk of faring worse than most. In a graph widely circulated this week, IMF data showed that the gap in increased energy related spending between the poorest and richest households in the UK is the second highest amongst similar countries. 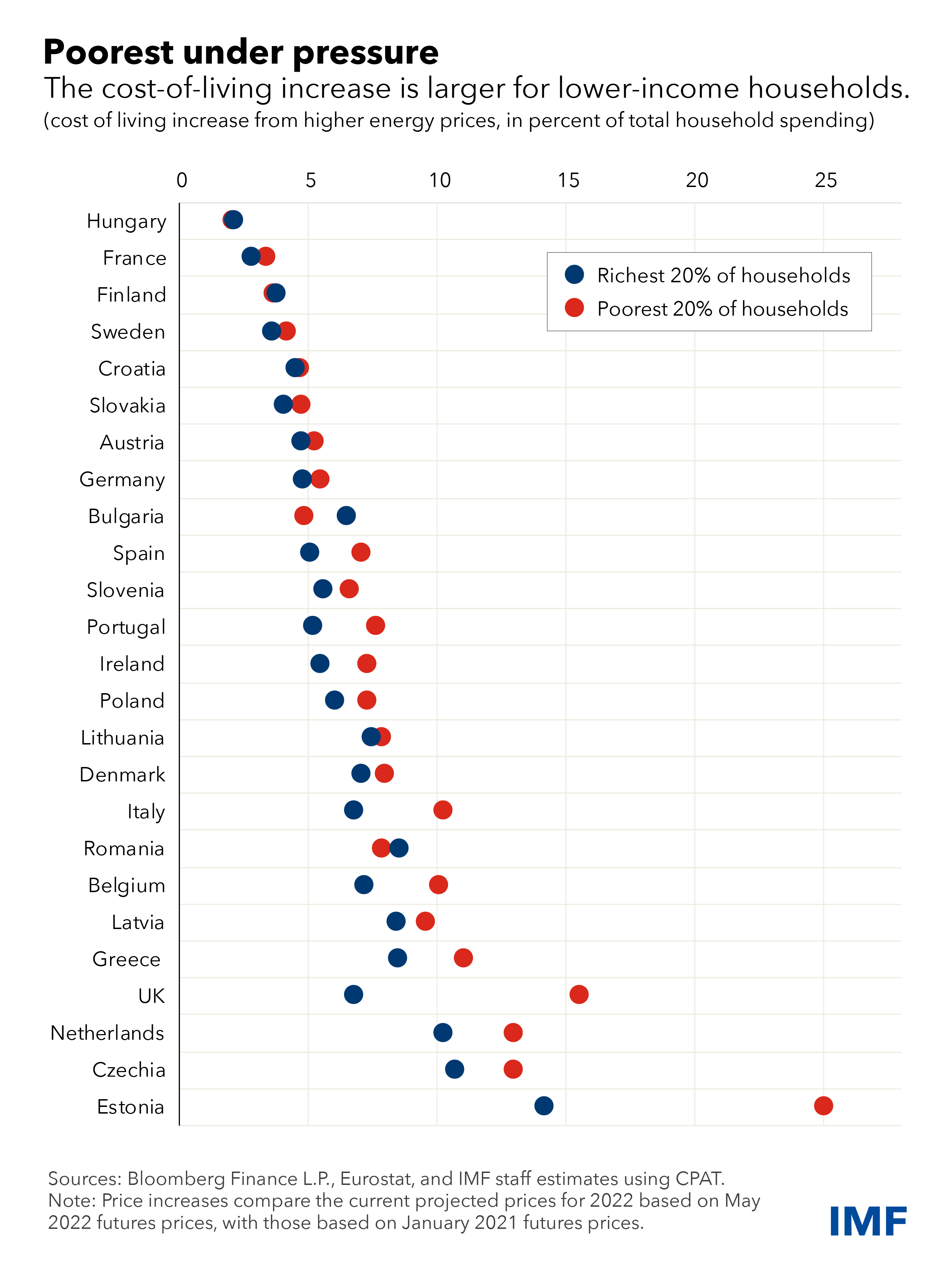 Three weeks ago, Reform had questions for the then five Conservative leadership candidates. Many of those questions remain unanswered by the remaining two candidates, and some of the questions — on cost of living and tax cuts in particular — are now even more pressing. We were concerned about how Liz Truss would pay for her £40 billion of proposed tax cuts before the BoE forecast a five quarter recession. That contraction is likely to wipe out the ‘fiscal headroom’ Truss was promising to use to fund her unfunded tax cuts.

We’d also ask why both candidates are focused on tax proposals whose benefits will mostly be felt by the highest deciles of the income distribution, and do very little for those worrying about how to pay for the basics of food, energy and housing. ONS data finds that more than one in three are already spending less on essentials to cope with rising prices, and the worst is yet to come.

Increasingly, the most deprived households have begun turning to credit to help pay for essential bills. If Rishi Sunak is worried about putting things “on the country’s creditcard”, perhaps it’s also worth thinking about the financial risk created by thousands of households turning to short-term credit to make it through next year.

With the urgent need for more support for struggling households, both Sunak and Truss must put forward serious plans to meet this emergency.

Onto the recommended reading for this week…

First up, this scathing read from The Telegraph’s Chief City Commentator Ben Marlow on the failed state of our national infrastructure. Taking aim at the water industry in particular ("On just about every measure, the sector’s record is truly risible”), Marlow argues that large profits are finding their way to offshore investors, and industry bosses are making millions, while consumers are being told to use less water. Shockingly, 3 billion litres of water are lost every day as the result of leaks. Such underinvestment in core national infrastructure is not unique to water, as Marlow points out. But more than just a failure to regulate, it’s also symptomatic of the failure of the political class to do long-term planning.

Secondly, this report from the Levelling Up, Housing and Communities Committee on the long-term funding of adult social care. The Committee argues that funding allocated to the social care system will be inadequate to meet the huge pressures it faces in the coming years. However, despite the need for investment, the Committee (like us at Reform) is not confident that the Government, or the Department of Health and Social Care, would know what to do with additional resources were they made available: “The Government currently has nothing more than a vision (for social care), with no roadmap, no timetable, no milestones, and no measures of success”. We couldn’t have put it better ourselves!

Third, an aptly timed report from Onward — which coincides with a publicationby the Lords’ Science and Technology Committee yesterday concluding the slogan ‘science and technology superpower’ currently has “no credible definition or underpinning”. The Onward report is clear that to be a science superpower means not only creating knowledge through R&D investment, but having structures to mobilise it — to meet specific economic, technological or military ends. For example, whilst the UK trains more postgraduate STEM students per capita than most of our competitors, fewer go on to apply these skills in the labour market. Recommendations include simplifying the system of R&D tax reliefs to encourage greater private investment, and targeting more research funding at areas of “near-market” comparative advantage, such as cyber security.