When it comes to political debates, you can often learn just as much from what is left unsaid, as you can from what the candidates actually talk about.

Of course, both candidates acknowledged the NHS crisis and the need to address it. Rishi reiterated his plans for a £10 charge for people who miss appointments. Liz said tackling NHS backlogs was one of her priorities for the first 90 days. But it was striking that the most focused contribution on public services didn’t come from either of the candidates.

Instead, it came from Camilla Tominey, Associate Editor of the Telegraph and the moderator of last night’s hustings. While quizzing Liz Truss, she raised an IFS report published this week, which models how different inflationary forecasts will affect government funding for public services. In response, Ms Truss said only that inflation will boost tax revenue – she made no comment on public services. 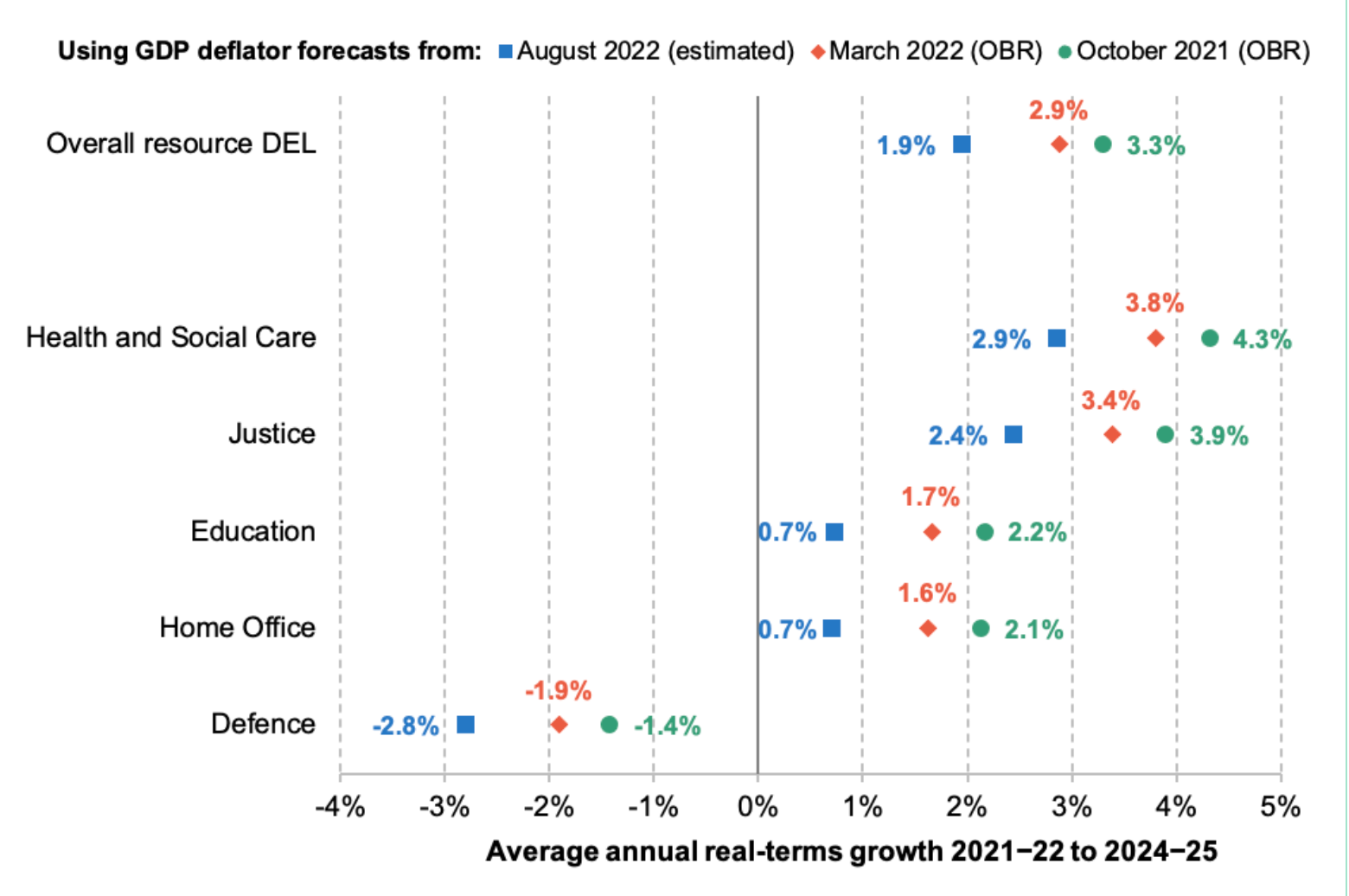 But the IFS report is striking. What the graph shows is that, while the original plans offered a real-terms annual increase in departmental spending of 3.3%, this slipped to 2.9% by March 2022 (based on updated OBR inflationary forecasts). And now, with the latest inflationary figures taken into account, growth is projected to be just 1.9%.

For specific departments, the numbers are even starker. At the Department for Education and the Home Office, the average annual increases are now projected to be just 0.7% (down from three times that level). For health and social care, a 4.3% rise is now just 2.9%.

What this illustrates is not simply a funding crisis, though the IFS is right to call this a squeeze on public services. It also demonstrates a real, pressing need for politicians to think about their vision for public services and how to address demand in a sustainable way.

As we enter a painful winter, the Government will, we assume, focus considerable resources on tackling the cost of living crisis. Given the scale of the expenditure required to make any meaningful impact, it seems unlikely that departmental spending will be increased (except for defence, if Truss becomes PM).

While at least some further funding is needed, particularly given the budgetary impact of public sector pay settlements, part of the answer must lie in reforming public services, with a focus on addressing the drivers of demand and improving efficiency.

The next PM must have a short-term and a long-term plan. In the short-term, creative thinking (and yes, some money) is needed to tackle backlog Britain. In the longer-term, the OBR is clear – and has been for years – that continuing with current policy means the public finances are on an “unsustainable” path.

The approach of burying ministerial heads in the sand and leaving it to the next (and the next and the next…) occupant of No 10 is morally bankrupt. Future generations deserve high-quality, sustainable public services, just as previous generations have benefited from them.  And current generations deserve higher quality services that are actually improving lives rather than picking up the pieces when things go wrong. The current model isn’t working and an urgent rethink is needed.

For the next government, presenting a long-term, sustainable vision for public services is essential. As we enter the second half of a leadership contest that will determine our new Prime Minister, Reform is calling on both candidates to lay out their vision for the role of the State.

And now onto this week’s recommended reading...

Firstly, another paper published by the IFS, looking at disparities in care quality. The report shows the human impact that levelling up the quality of cardiology treatment could have across the country. It finds that if 100 people in the North-East had been treated by cardiologists of the average quality found in London (rather than the average for their region), an additional 4 people would have been expected to live for another year. For 100 people in the East of England, another 2 would have lived for another year at least. Further evidence of the inequity of the current health system.

And secondly, a report from Policy Exchange – Policing Can Win: The Next Met Commissioner’s First 100 Days. Written by David Spencer, the founder of Police Now (Teach First for cops), it discusses how the Met can regain public trust, via three key steps: improving leadership, addressing officer misconduct, and (unsurprisingly) fighting crime – with a particular focus on reviving neighbourhood policing teams that have long been in decline throughout the capital. Linked to this is perhaps the most interesting idea in the paper: devolving budgets to local borough commanders, giving them control over how they run their workforce and where they operate from.