Good for, bad for: Reform's Budget and Spending Review 2021 breakdown

The Chancellor’s job was made easier by a punchier than expected economic recovery – thanks in no small part to the Government’s successful vaccine roll out. In their ‘Economic and Fiscal Outlook’ the OBR state that output and taxes are higher, and pandemic-related fiscal costs lower, than forecast in their March assessment. In addition, post-pandemic scarring is likely to be 2% rather than the 3% previously predicted.

The recovery over the coming quarters will, however, be tempered by the now well-rehearsed supply “bottlenecks” and Brexit-related migration and trade changes. And families and businesses will be hit hard by the resultant inflation, which, the OBR concludes, will likely peak around 5% next year.

Going into the Budget and Spending Review, the Chancellor had £38 billion a year of ‘fiscal headroom’ to play with (compared to the March forecasts, recovery plus inflation has led to much lower than expected borrowing). This headroom, plus the massive increase in taxation (largely from the NICs hike), meant Sunak could afford to spend. As a result of today’s spending plans, total managed expenditure (TME) – which broke the trillion mark last year – will, between this year and 2024-25, see an average annual real terms growth of 2%. As a percentage of GDP, TME will settle at 41.6% (higher than pre-pandemic): “the largest sustained share of GDP since the late 1970s” (see the OBR graph below). 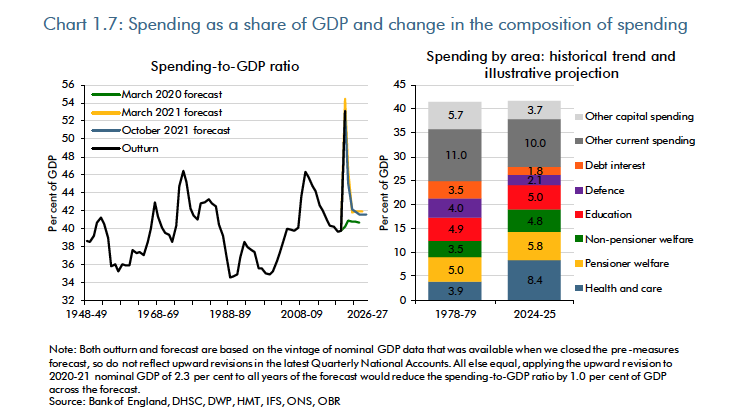 Yet while the OBR’s revisions to their March forecasts may have been positive for the Chancellor, the same can’t be said for families. Real household disposable income will be lower over the coming years than expected in March – the price rises – though thankfully still increasing year on year. It won’t be until the second half of 2023 that, on a per person basis, real household disposable incomes will return to pre-pandemic levels. Analysis today by the IFS finds that over the next year, a median earner will see their take-home pay fall in real terms.

In terms of the specific measures announced by the Chancellor, there is much to support in terms of public services. Highlights – some of which we detail below – include a significant cut to the Universal Credit (UC) taper rate, some serious additional funding for covid recovery, new money for boosting skills, investment in regional and local transport, and a focus on early years. As ever, social care is MIA – we already know the allotted share of the new levy is woefully small over the next 3 years. The Government appears to be relying on substantial Council Tax increases to help plug the gap, with the OBR expecting annual increases of around 6%. By 2026-27 Council Tax receipts are expected to be 33% higher than pre-pandemic.

Here at Reform we were particularly pleased to hear the Chancellor say that the Budget’s “success will be measured not by the billions we spend but by the outcomes we achieve and the difference we make to people’s lives.” An accompanying publication, ‘Spending Review 2021: Priority outcomes and metrics’, spells out the metrics against which departmental performance will be assessed. A quick scan reveals a seeming confusion about what constitutes an outcome versus an input or output – performance metrics for the Department for Health and Social Care, for example, include the number of GP appointments and the number of new hospitals under construction, neither of which are measures of improved health – but the principle of having clear accountability measures is right.

This year's Budget rabbit was the much larger than expected cut to the UC taper rate. For those less familiar with the jargon, that's how quickly benefits are withdrawn as someone earns. At the moment, for every pound earned above an initial earnings disregard, 63 pence is withdrawn from that worker's UC payment. Today the Chancellor slashed that to 55 pence, which was the taper rate originally envisaged for UC (a certain former Chancellor kiboshed that to hold down costs). In addition, work allowances — that amount you can earn before benefits start to be withdrawn — have also been increased, by £500. This is fantastic news for low-income working families, and will hopefully also incentivise UC recipients to work more. Inevitably, people will point out that this doesn't help non-working UC recipients, and this is true. It's also true that it won't compensate for the removal of the £20 uplift. But in-work poverty is a huge problem — 75% of children in poverty live in households where at least one person works — and this move will really help. Even better, the Chancellor has announced that the Government will not be waiting until next April to bring in the change, but will act as soon as possible, no later than 1 December.

Missing from the March Budget was any real attempt to grapple with pandemic-induced public service backlogs. With 5.7 million patients on NHS waitlists, hundreds of thousands of court cases waiting to be heard, and most children having lost over half a year of in-person schooling, it was right that Covid recovery was a priority this time around. The Chancellor announced big new cash injections for building surgical and diagnostic hubs (£3.8 billion), easing the courts backlog (£500 million) and helping schools recover (£1.8 billion). Welcome as this is, however, the Government should be cognisant of the fact that money alone won't solve these problems. New operating theatres, for example, won't do much to ease NHS waitlists if there aren't doctors and nurses to staff them. However, credit where credit is due — Government is putting its money where its mouth is when it comes to putting core public services back on track.

By lowering air passenger duty on domestic flights and maintaining the fuel duty freeze (for the 12th year), the Chancellor risks undermining the Government's ambitious plans to hit Net Zero. The desire to ease the squeeze on living costs is understandable, however the long-standing fuel duty freeze has contributed to higher CO2 emissions. The cut in air passenger duty is harder to justify, despite the Chancellor’s efforts to link cheaper domestic travel with increased regional prosperity. Domestic UK flights are worse for emissions than short-haul flights to Europe, long-haul flights, coach travel and both intercity and international train travel, according to BEIS analysis from 2019. Encouraging them, especially with COP next week, really is at odds with the Government’s environmental ambitions. Getting to Net Zero will be expensive and require citizens to make significant trade-offs. The Government will have to have an honest conversation with the public about what it will take, and utilise all its levers — including tax — to encourage greener behaviour.

It wouldn't be a Reform Budget day analysis without reference to the lack of a sustainable plan for social care. Despite Government talking a big game, a lack of ring-fenced funding means social care will have to vie with other local services for its share of the £1.6 billion annual uplift in local government spending. With large chunks of money being swallowed up by changes to the care cost floor and newly announced cap, and providers footing bigger bills as a result of increases to the National Living Wage (mean hourly pay in the sector is currently £9.29), little will be available to address eligibility and quality challenges. It's worth reflecting on the fact that an estimated 1.6 million older people have unmet care needs. That's a crisis in itself but it's also an own goal for NHS recovery plans — underfunding social care makes it all the more difficult to move older patients out of hospital wards to free up capacity to work through the backlog. Continuing to treat social care as the NHS's cinderella service will only deepen the crises in both sectors.

The Budget had a very welcome focus on families and early years, with multiple funding commitments. Investing in the early years of a child's development is a cost-effective way to improve life outcomes — ultimately reducing the £16 billion spent on remedial action. However, a closer look at the spend raises questions. In August, the Government announced £20 million of funding to set up Family Hubs in 10 new areas. Today's Budget promises to roll out and improve Family Hubs in 75 Local Authorities, but with just £18 million of cash attached, and not allocated for spending until 2024-25, it's not clear how impactful it will be. In total, £208 million of 'new money' is earmarked for supporting families, with the bulk going towards increasing pay for early years providers. £20 million is also allocated for parenting support — again in three years' time.