A degree of uncertainty: an investigation into grade inflation in universities

With one-third of 18-year-olds now entering Higher Education (HE) each year, the ‘degree classification’ (i.e. final grade) awarded to students is arguably more important now than it has ever been. These classifications allow other individuals and organisations to differentiate between graduates in terms of what they have achieved by the end of their degree course. Any sign that the value of degree classifications has diminished over time would therefore be of great concern.

In the mid-1990s there was no detectable ‘grade inflation’ at all, with 7 per cent of students awarded a First-class honours (‘First’), yet the upward trend in Firsts being awarded to students over the last two decades has been unrelenting. From 1997 to 2009 the proportion of Firsts almost doubled from 7 to 13 per cent, and in just seven years since 2010 the proportion of Firsts has doubled again from 13 to 26 per cent (climbing from 22 to 26 per cent in the last year alone).

The percentage of students being awarded a 2:1 has also risen from 40 to 49 per cent since 1995, meaning that the proportion of students awarded either a First or 2:1 has increased from 47 to 75 per cent over this period. 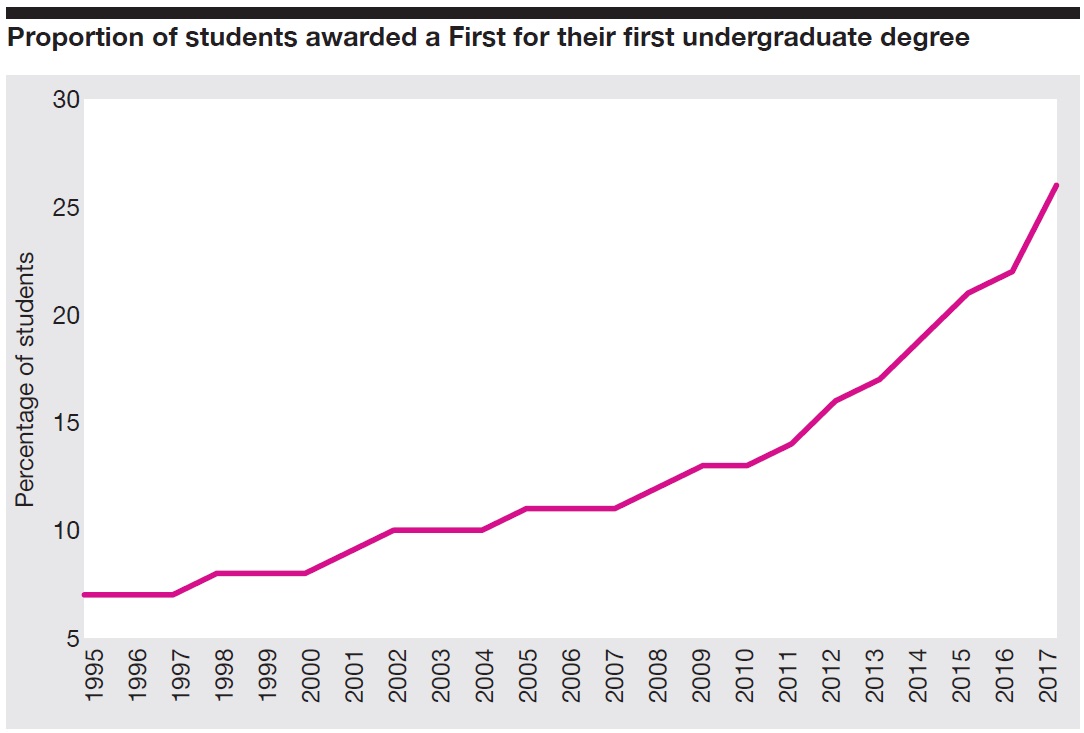 There is considerable evidence to suggest that ‘degree algorithms’ (which translate the marks achieved by students during their degree into a final classification) are contributing to grade inflation. Approximately half of universities have changed their degree algorithms in the last five years “to ensure that they do not disadvantage students in comparison with those in similar institutions”. Research has also identified serious concerns about how these algorithms treat ‘borderline’ cases where a student’s overall mark is close to the boundary of a better degree classification. One expert concluded that “universities are essentially massaging the figures, they are changing the algorithms and putting borderline candidates north of the border”.

Similarly, the pressure being placed on academics by senior managers at universities to lower their standards is also strongly implicated in grade inflation. Some academics have chosen to express their concerns publicly, even though this has on occasion put their own career at risk. One cited the “intolerable pressures on academic staff to pass students who should rightfully fail and to award higher classes of degrees to the undeserving”, while another complained that they had routinely awarded essays low grades “but have been brought under pressure, internally and externally, to provide higher grades.” The sheer volume of similar reports, documented over many years, is concerning and its potential impact on grade inflation is obvious enough.

Several other factors have been cited to explain the inflation, such as the pressure from league tables, greater competition between institutions and a more ‘consumerist’ attitude from students. However, the inflation itself must be driven by factors that directly translate into universities awarding higher marks such as degree algorithms. Some university leaders have also put forward their own suggestions for what might have caused grade inflation, such as admitting students with higher A-level grades, improvements in teaching quality or students working harder than ever before. However, these are rarely supported by research findings and in any case they are often contradicted by the extent and rate of inflation in recent years.

The inadequacy of current arrangements

The Quality Assurance Agency (QAA), established in 1997, has conducted regular visits to universities to assess their procedures for monitoring and assuring standards and to make recommendations for improvement, but it has previously admitted that “we do not judge the standards themselves”. The system of ‘external examiners’, who act as moderators for the exam marking carried out at other institutions, has been in place since 1832 but research has found “little evidence to support the view that external examiners are an effective means to safeguard academic standards”.

The incorporation of a grade inflation metric into the ‘Teaching Excellence Framework’ is unlikely to have any substantial impact, given its emphasis on asking universities to ‘justify’ any inflation rather than investigating it themselves. It is also unclear how the new regulator for HE in England – the Office for Students – will prevent grade inflation when it must simultaneously promote greater competition between institutions and protect the autonomy of universities. While competition and autonomy are acceptable goals in themselves, it is essential that HE providers compete and use their autonomy in the right manner. The evidence on grade inflation presented in this report suggests that the competitive landscape in HE has encouraged universities to use their autonomy in the wrong way, to the detriment of students and taxpayers.

Reform strongly supports the principle of autonomy for education providers and for public service providers more broadly. Universities should operate free from government interference as far as possible. However, autonomy does not mean the absence of accountability, particularly when universities receive £17.7 billion of tuition fee revenue each year. At this time, students have no way of directly comparing the standard of degree courses at different institutions and taxpayers have no way of knowing when and where universities are delivering high-quality provision or value for money.

One of the most significant changes in education policy in recent years has been the movement towards involving ‘end users’ in qualification design and assessment. This report therefore outlines a new system for awarding degrees that delivers a greater role for professional bodies and other similar organisations. The new assessment model will end grade inflation as well as produce consistency and comparability in degree standards through the introduction of a single national assessment for each degree course.

It is in the interests of both students and universities to stop grade inflation. While universities will almost certainly prefer to maintain the status quo, other possible solutions would be far more interventionist and intrusive. The proposals in this report offer a more appropriate balance of autonomy and accountability for HE providers by leaving a large proportion of what they deliver untouched while also allowing students, parents and employers to make more informed decisions about which university and which degree course is right for them.