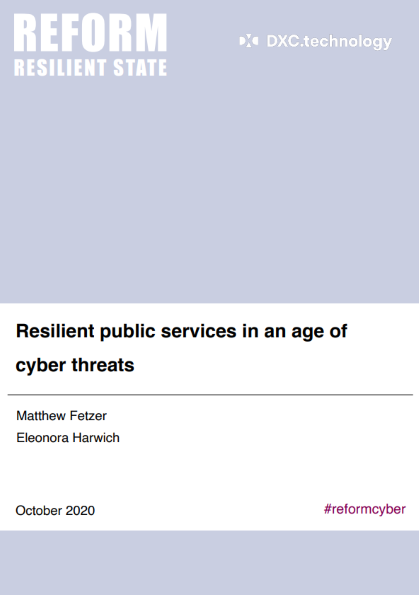 On 15 October, Reform published 'Resilient public services in an age of cyber threats'.

The report was covered on: Computer Weekly, DIGIT and UK Authority.

“The number of patients waiting for more than 52 weeks for treatment jumped 33 per cent between July-August. This means that an extra 28,000 individuals face future ill health or disabilities, due to delays in their treatment. This is unacceptable and requires urgent attention.

“While some progress is being made on median waiting times, at 54% the NHS is well under its target of 92% of patients starting treatment within 18 weeks.

“A pragmatic approach to this capacity issue is now urgently needed. Local health teams need to lead the response by reorganising resources and creating specialist centres to deal with particular procedures, repurposing Nightingale facilities, and extending contracts with private providers.” 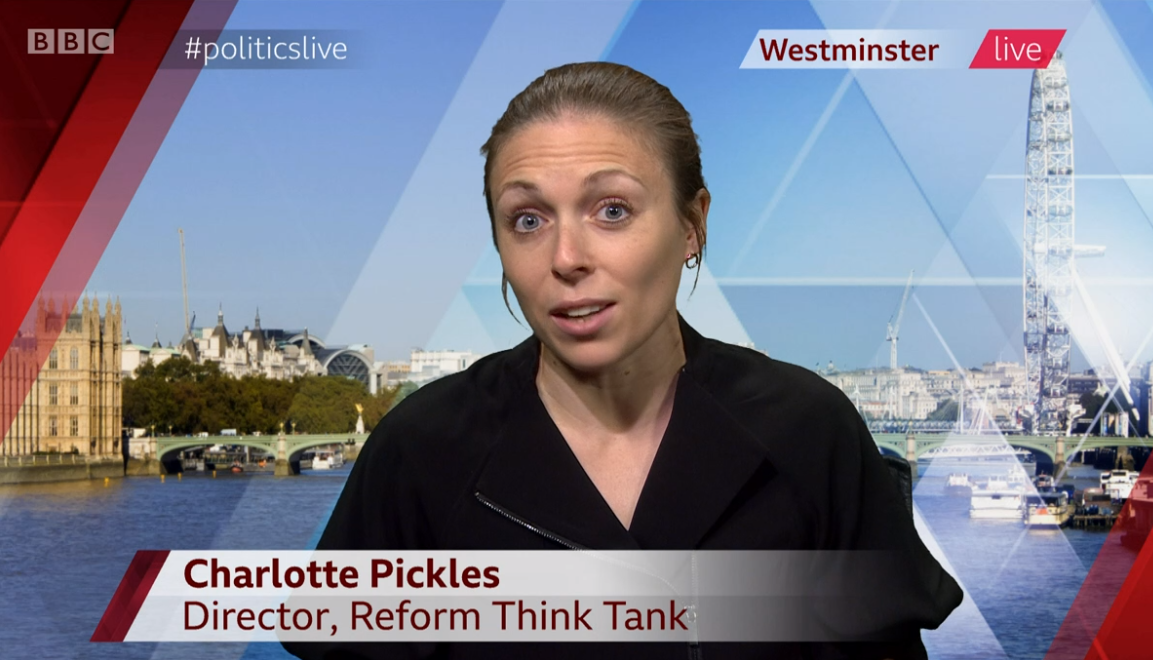 “The Government’s new scheme is rightly trying to prevent a looming jobs bloodbath without propping up zombie jobs. It is not clear they have found that balance.

“This follow up to furlough has an in-built disincentive for employers, unlike the schemes in Germany and France where the State alone covers the costs of hours not worked. Why would an employer, struggling to stay afloat and uncertain when the economic tide will change, pay this additional cost? Many may opt for simply reducing workers’ hours without top up or proceeding with redundancy.

“Particularly worrying, the Chancellor does not seem to have allocated any further funding for retraining and upskilling, despite the fact that unemployment looks set to keep rising. This is a black hole in the Government’s thinking.” 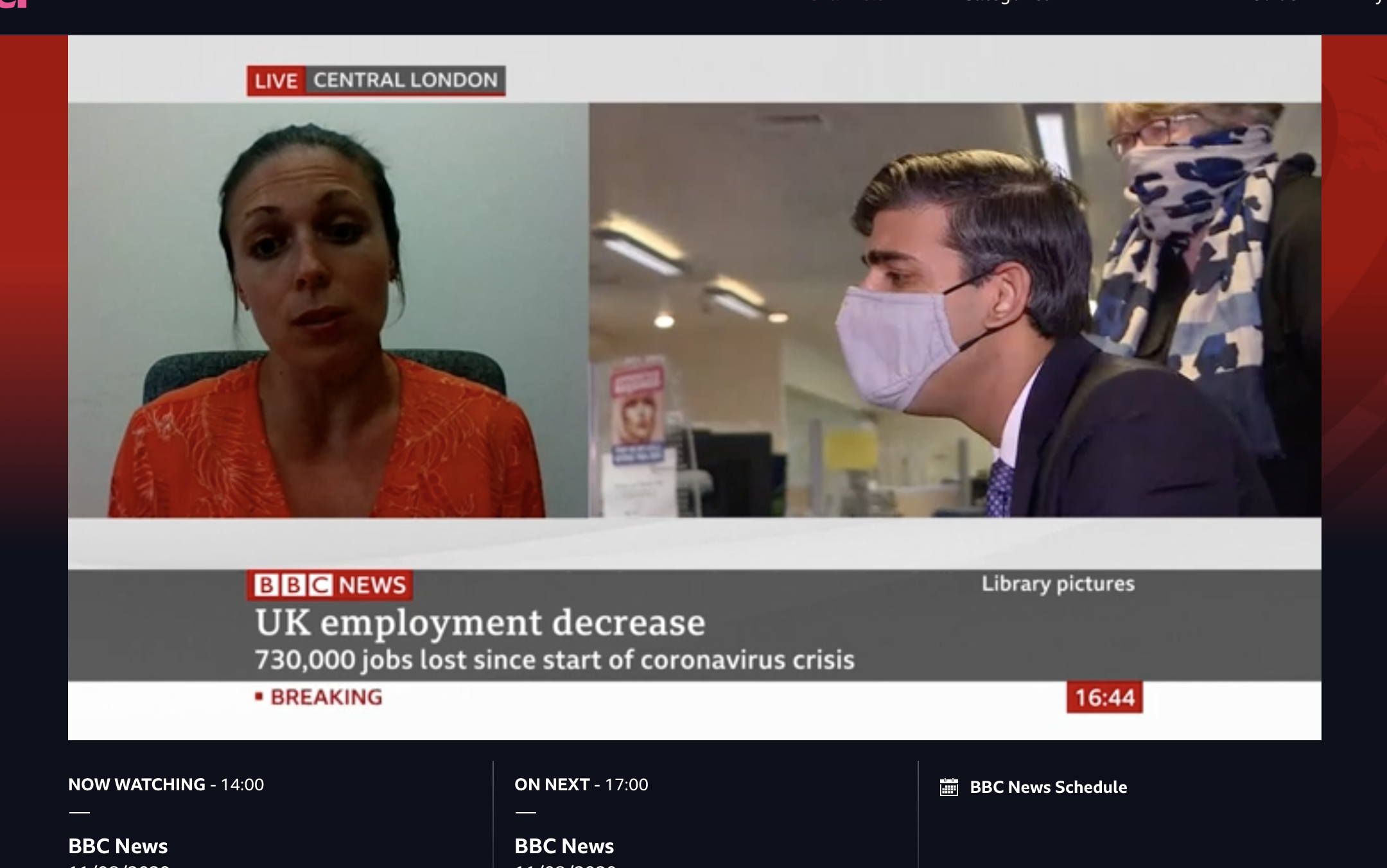 Charlotte Pickles was interviewed by BBC News on the latest labour market update from the ONS.

Charlotte made the case for extending the furlough scheme beyond October 31, arguing that the financial costs represent good value for money and would stave off costly economic ramifications. 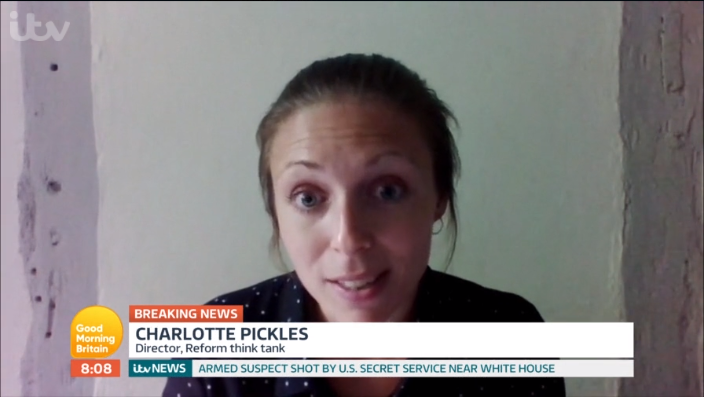 Charlotte warned that, without Government intervention, we're headed for an employment crisis on par with the Great Depression. 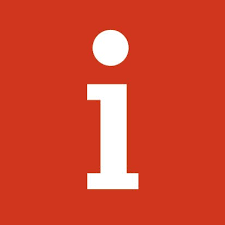 “Today’s headline data masks the true extent of the unemployment crisis we’re heading towards. The unemployment rate may be stable, but almost three quarters of a million fewer people are on payroll, the number claiming unemployment benefits has more than doubled and economic inactivity is rising – plus millions remain on furlough.

“At the same time, we have a hiring crisis. Many of the jobs disappearing in sectors such as leisure and hospitality won’t come back. While the Government has pledged serious investment to support young people, they have all but ignored the challenge facing older workers, many of whom will have to switch careers and require support to retrain.

“Ministers should also consider a ‘flextension’ to the furlough scheme. The threat of a second wave and further local lockdowns will damage the economic recovery, simultaneously scrapping the furlough scheme risks a jobs bloodbath in the Autumn. Extending the scheme with greater flexibility, only for those sectors hardest hit, could provide a lifeline for millions.”

Covered in The i and Personnel Today.

Bridget Phillipson MP, Shadow Chief Secretary to the Treasury, has today (17 July) called for the National Audit Office (NAO) to launch an inquiry into the Job Retention Bonus scheme and whether it is good value for money.

“We back this call from the Labour Party.

“There is a real risk that much of the £9bn earmarked for the Job Retention Bonus will end up as ‘deadweight’ spending. Businesses who were always planning to return furloughed employees stand to benefit from some extra cash, regardless of their financial situation. Given the devastating impact of coronavirus on the public finances, this is something that we cannot afford to happen.

“The Government’s Coronavirus Job Retention Scheme has been a success. There is a risk that this may blemish it. We urge the Chancellor to reconsider this policy.” 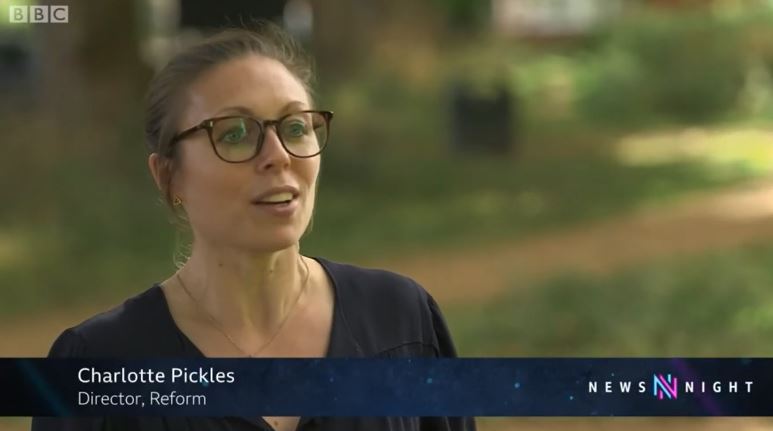 Watch it back, here. 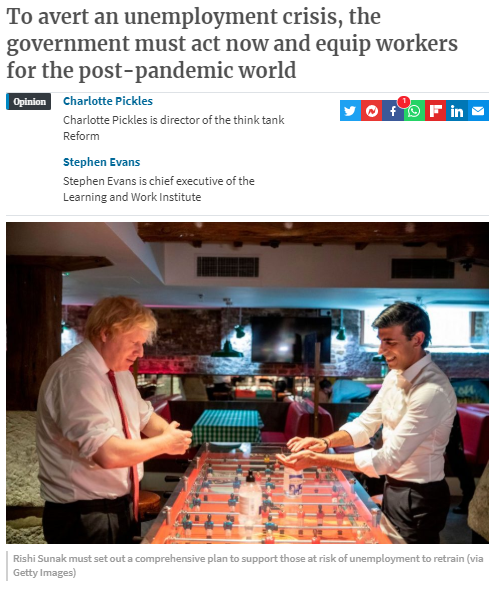 Ahead of the Chancellor’s Summer Economic statement, Charlotte Pickles wrote a joint article with Stephen Evans, Chief Executive of Learning and Work Institute, for City A.M. Making the case for a £3.2 billion support package, they warned: “It took several years for jobs to recover from each of the last three recessions, and this recession is like no other.” 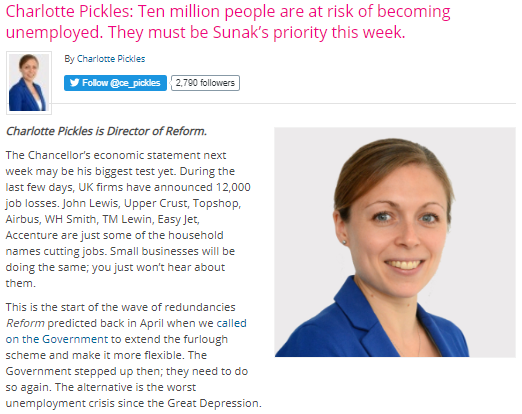 Reform Director, Charlotte Pickles argued in Conservative Home that “delaying decisions about investment in employment and skills could be catastrophic,” ahead of the Chancellor's Summer Economic Statement. 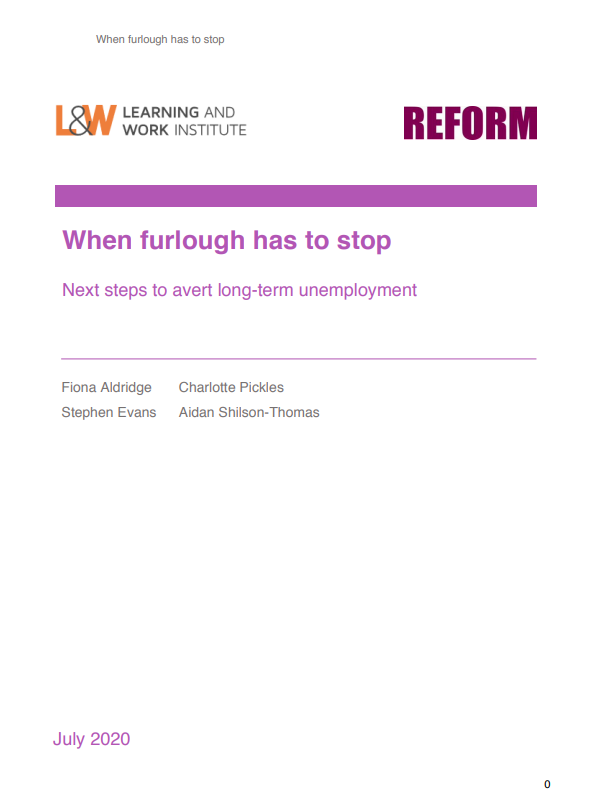 Report coverage: When furlough has to stop

On Friday 3 July, Reform and the Learning & Work Institute published 'When furlough has to stop: Next steps to avert long-term unemployment'.

The report was covered by: the The Sunday Times, Independent, Politics Home, TES and FE News.

You can read the full report here.

Renationalising probation not a ‘silver bullet’ but a ‘huge challenge’, warns think tank

“Renationalising probation services is no silver bullet, and does not guarantee the quality of offender supervision needed to keep the public safe and reduce reoffending.

“It will be a huge challenge for the National Probation Service to take over from the private sector in such a short time, including recruiting and training large numbers of staff.

“Previous reforms have been rushed, and the next steps must be taken carefully. The Government must not make the same mistake of under investing, which crippled the current model, and avoid overburdening probation services with unnecessary centralisation.”

In response to the Chancellor's announcement extending the Corona Virus Job Retention Scheme and introduction of part-time working, Aidan Shilson-Thomas wrote a comment piece for City AM.

Furlough extension and flexibility is welcome, but eligibility criteria and fraud prevention must now be tightened to minimise the bill

Welcoming the Chancellor’s statement to the House of Commons announcing an extension of the Furlough scheme and the introduction of part-time working, Aidan Shilson-Thomas, Reform Researcher, said:

“I warmly welcome this move which will help prevent a wave of redundancies and aid our economic recovery.

“Crucially, the Chancellor’s plan to introduce part-time working will give employers the flexibility to reintroduce furloughed staff gradually, following the tempo of the economic recovery.

“However, while the Chancellor is right to err on the side of caution, he must minimise the risk of wasting taxpayers’ money. Extending the scheme must be accompanied by an urgent review of the eligibility criteria to ensure only companies that have taken a serious financial hit receive support. To that end, Government should now ask employers to prove their financial hardship, as they do in other countries. HMRC must also ramp up efforts to deter any abuse of the scheme, with serious sanctions for would-be fraudsters.”