Devolution has propelled back into the political spotlight. This week, the Prime Minister reaffirmed her Government’s commitment to the Northern Powerhouse. This follows the debate on Yorkshire devolution, where the Government and local leaders ended the discussion at stalemate over which form the deal should take.  As noise on devolution builds once again, it is important to consider the progress made so far in handing back power from Whitehall to local areas.

Whilst the Yorkshire deal has stalled, devolution has begun apace in the rest of the country. Since 2014 eight devolution deals and £7.4 billion extra funding have been agreed. The original aim of these deals was to improve economic productivity and tackle the north-south divide. City regions were identified as having the greatest opportunity for growth, so devolution has focused on these. However, successful rural deals, such as the one made with Cornwall, indicate devolution should be applied to the wider country, as benefits of devolution do not just include economic growth. 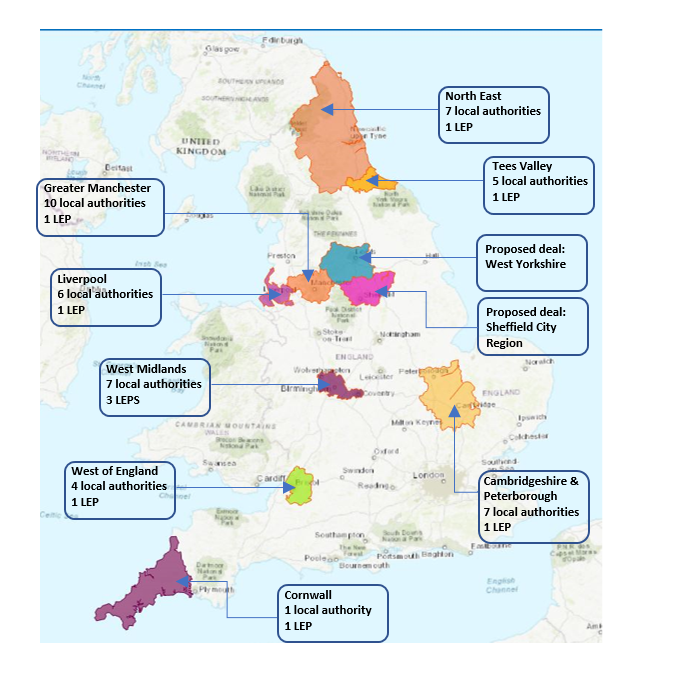 Devolution presents an exciting opportunity to improve value for money from public-service commissioning.  Commissioning is the design, purchase and evaluation of services.  Economic growth and value for money are two sides of the same coin; if areas have more control over funds, they can place funds in services that most help local need and improve outcomes. Finland, the world leader for value-for-money healthcare, has devolved power and funding of healthcare to local authorities and has better cancer survival rates than the UK. As previous Reform research has argued, central commissioning of services has not achieved value for money; health outcomes differ starkly across the country and a ‘one-size-fits-all’ approach to commissioning does not respond to this.

Most devolution deals are still in their infancy but outputs already seen from the Greater Manchester deal show the positive impact local governance can have on public services. Health and social care has been integrated and the combined authority will collaborate with local NHS bodies to control a £6.6 billion budget. Given that Manchester has the highest rate of cancer in the UK, local control is vital to tailor healthcare to this need. Andy Burnham, the metro mayor elected to lead the combined authority, has also made a pledge to tackle homelessness, an acute issue for the city.

However, to date, all deals are devolution only in name. This is because power transfer has been no more than delegation. Delegation is the administrative transfer of powers whereas devolution is the transfer of decision-making and funding. Central control of commissioning has been retained either through co-commissioning arrangements or central contracts.  Indeed, even in the landmark health and social care deal in Greater Manchester, NHS England still maintains overall control of services through central contracts. This does not mean, however, that true devolution is not possible; progress is being made in some areas, such as the full devolution of the adult skills budgets, and most local areas do want more power to improve public services.

Progress is important because there is a desire from the public to have more local control over public services. One Ipsos MORI report on devolution in Hampshire found that almost three-quarters of residents supported the principles of transferring more powers and funding to local councils. On public-service commissioning, an Institution of Civil Engineers survey found that two in five English adultsthought devolution would have a positive impact on local services – double the proportion who say negative.  In Yorkshire, a strong sense of regional identity has been a key driver in pushing forward with a deal.

With devolution in the public eye once again, it is crucial to recognise not only the limited progress made so far but also the unique opportunity devolution presents, if done properly, for reforming public services. An upcoming Reform report argues that far greater power and public service spend should be devolved to areas across the country. Only then can public-service commissioning deliver better outcomes for local populations at a lower cost for the taxpayer.