Discussions about medical research usually revolve around two questions: How much? And for what diseases? Often overlooked is a third question: Will this research make any contribution to scientific knowledge and medical progress?

Too often, the answer to the third question is ‘no’. A staggering $85 billion in precious medical research funding goes to waste every year worldwide simply because researchers fail to publish their findings.

This figure includes hundreds of trials run by UK universities and NHS Trusts, many of them funded by public money. A report released last week estimates that UK universities alone have conducted around 800 clinical trials that are now in acute danger of becoming research waste because their results have never been made public.

Some universities have started to tackle the problem. King’s College London, Nottingham and Cardiff have already made huge progress in improving their trial reporting. However, despite calls by government ministers to “sort it out”, 19 out of 27 universities have not uploaded a single missing trial result over the past two months, as the chart below shows. 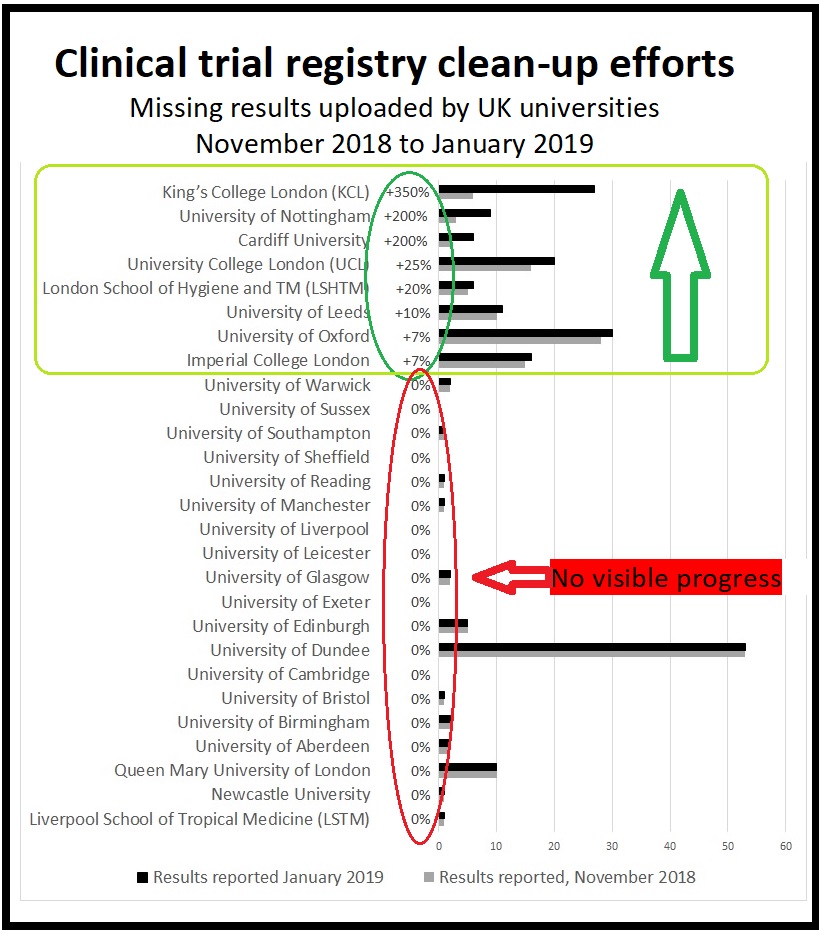 Trials can cost millions of pounds to run. Even so, the damage caused by this lack of transparency extends far beyond the wasted investment into the trials themselves. In one notorious case, a clinical trial picked up an early warning signal flagging deadly side effects of the drug Lorcainide. The trial’s results were not made public, and Lorcainide went on to kill over 100,000 people before it was pulled off the market. In another case, the NHS misspent £424 million on the drug Tamiflu because it was not aware of hidden trial results that revealed it to be essentially useless.

Years later, the NHS is still unable to accurately assess the benefits and harms of drugs and medical devices because existing trial transparency regulation remain unenforced.

In October 2018, the Science and Technology Committee of the House of Commons threw down the gauntlet. It called on the government to finally ensure that all clinical trials run in the UK fully report their results. The Chair of the Committee, Norman Lamb MP, noted that “Many of these trials are funded with public money and the tax payer has a right to expect those who benefit from public funding to follow the rules and publish in full.” Last week, he wrote to over 40 universities, challenging them to “get their house in order”.

The Committee proposed a simple yet effective solution. The Health Research Authority should start tracking all clinical trials, check whether they have uploaded their results onto trial registries within the 12-month time deadline set by the World Health Organisation, and fine those institutions that break the rules.

The technical challenges are negligible in the digital age. After all, the UK Driver and Vehicle Licensing Agency routinely tracks 37.7 million vehicles, and the NHS itself manages the health records of 55 million individual patients. In comparison, monitoring less than two thousand clinical trials a year ought to be a walk in the park. The cost of ensuring that public investment into medical research does not go to waste would be less than the price tag of a single large-scale trial. Importantly, as the Health Research Authority already holds all required records, scientists would not have to navigate any additional red tape.

By law, pharmaceutical companies and universities in the United States already have to pay $11,000 for every single day they neglect to make a clinical trial result public. (After years of inaction, U.S. authorities are finally preparing to enforce this rule.) Even a far more modest fee would be enough to cover the cost of the entire UK monitoring programme several times over.

The government is expected to respond to Parliament’s proposal in late February. Patient groups and transparency advocates will be watching closely. With financial pressure on the NHS increasing by the day, standing by idly while public resources are being wasted is no longer a viable option.

This blog was co-written by Rachel Cooper, Director of Transparency International Health Initiative, and Dr Till Bruckner, Founder of TranspariMED, a Bristol-based initiative that works to end evidence distortion in medicine.