Automation in the NHS

An upcoming Reform research paper on delivering an integrated NHS workforce will focus on the shape, rather than the size, of the workforce. Size however, is important and technology provides enormous scope to reduce the size and cost of the workforce.

In Work in Progress: Towards a leaner, smarter public-sector workforce, Reform outlined the potential for roles to be replaced or automated using technology. Using Frey and Osborne’s automation probability estimates, the paper calculated that 91,308 secondary care administrator jobs could be automated, shaving an estimated £1.7 billion off the wage bill. Similarly, extrapolating from pioneering GP practices, the paper suggested over 24,000 GP receptionist jobs could be trimmed if innovative methods were replicated across the system.

In a piece this week for City A.M. today, Reform has considered automation of front line staff. It argues that extending the use of technology could allow such staff to focus on the important aspects of their role that only they can do, meaning total headcount can be reduced without harming outcomes. The number of tasks within a job that can be automated, and thus the number of positions that are no longer required, differs by clinical role. Using McKinsey research, Figure 1 and 2 illustrate the potential of existing technology for rationalising the clinical workforce and associated costs. If the NHS embraced available technology, an estimated 114,462 frontline roles could be automated with cost savings of £4,624,478,556. 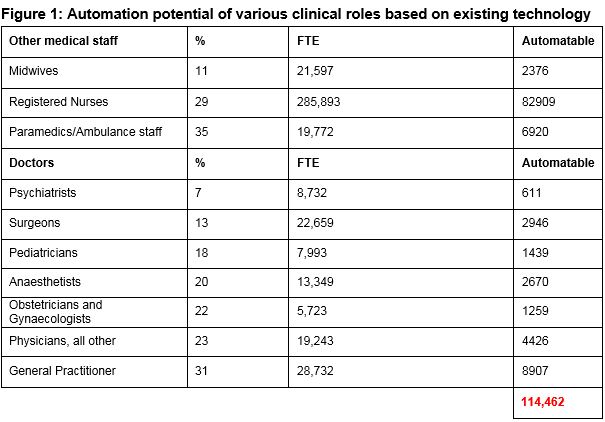 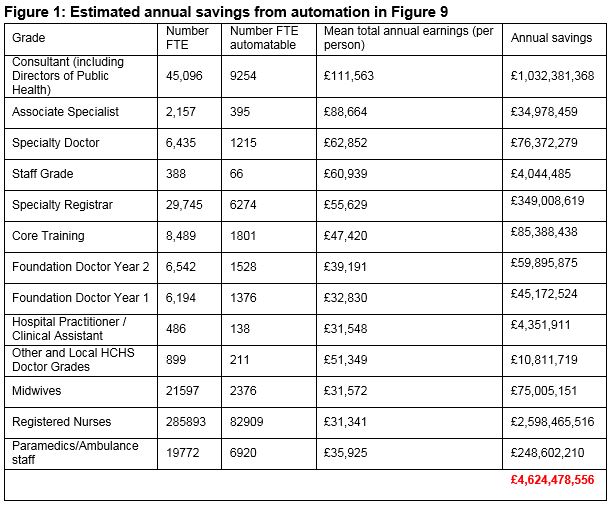 Limitations in publicly-available data mean the figures above should be treated as estimations rather than exact forecasts. Three areas merit discussion.

(1) The McKinsey automation data applies to a whole speciality, and does not differ depending on grade. For example, the same automation figure is used for both a junior and a consultant radiologist. However, a larger proportion of a junior doctor’s time is likely to be replaceable with technology. This is means fewer consultants and more junior doctors may be automatable. This is also means the cost savings are likely to be less than the estimate given as consultants are paid more than junior doctors.

(3) The McKinsey estimates are not produced specifically based on the NHS. It is therefore not possible to assess how accurately they apply to the NHS, as it not possible to say the extent to which such technology has already been adopted. This could mean that the figures are an overestimate or underestimate, depending on whether the NHS is ahead or behind of the health system used in the McKinsey analysis in terms of technology.

However, despite some method limitations, the above calculations demonstrate the potential of technology to help deliver less labour-intensive care. Extending its use within the NHS should therefore be a priority for pressurised trusts facing a rising wage bill.